2. Course of the game

The player, who throws the highest number, may begin the game with a renewed throw of both dice. Each player ad­vances by the number of fields equal to the total of the two dice. The purchase of plots and support points (if possi­ble), or the payment of rent, fine or duty (see chapters 5 and 6) takes place afterwards. Players who get a double (equal numbers on both dice), and do not land on an event field, the start field or the casino field after the move, may throw the dice one more time. Sales and remote buys (see chapters 8 and 9) must be done before throwing the dice. The objective of the game is to collect as much money as possible from the other players by buying plots, support points, toll stations and speed traps. The player, who has the highest asset (cash money plus value of the mortgages one would get for all possessions) at the end, is the winner of the game.

A player, who lands on the casino field, has to play at least one time in the space casino. The minimum stake is 100 MU and can be increased (in increments of a hundred) up to 1000 MU. You can bet on the following combinations (for economic reasons, all the theoretical odds are exponentiated with the factor 0.95 and rounded to one decimal place):

After the player has made a bet, he has to throw again with both dice. If his bet is right, he will get his winnings (stake x odds) and may play once again. For example, if a player bets on a double and makes a stake of 200 MU, he will get (200 x 5.5 =) 1100 MU in case of win. But if his bet is false, he will lose his stake and it is the next player's turn.

A player landing on a plot field of a planet may buy this plot. The price is stated on the playing field and must be paid to the bank. Then he gets the respective title deed card from the bank, which states the rent that other players have to pay once they land on this field. The price for building a support point is also stated on the card. Three support points are one space station and three space stations are one space base. The following rules must be followed:

A player buying a toll station or speed trap has no claim to the other three fields and you can't build any support points on them. On the other hand, the revenues go up with every toll station or speed trap you buy. For example, if a player owns all four speed traps, he gets four times the fine he would get, if he only owned one (if the same number was thrown). In addition, the owner has four times the chance that another player lands on one of his speed traps.

A player landing on an event field (the fields with three question marks) must draw an event card and follow the in­structions on the card. If a player has to advance to the opposite side of the game board, he does not have to draw another event card and he is not entitled to get the bonus of 1000 MU, since he did not pass the starting field. After the last card has been drawn from the game board, all event cards are shuffled again and placed upside down on the planet images on the game board. Hint: The execution of specific events can also occur by dice combinations. In this case the event cards are no longer required. Instead, you only have to throw the dice once again. Proposal:

If a player has a claim to the other two plots of a planet and another player lands on one of these plots, a remote buy is possible. Consequently, the player wanting to carry out this remote buy has to pay the price for the plot to the bank to get the respective title deed card. Afterwards he must pay a premium to the player, who got on his plot field. The amount of the premium is stated on the card he received. Remote buys are only possible, if it is the turn of the player who wants to carry out this remote buy. If a player wants to carry out a remote buy on a plot field where several play­ers have landed, the player who first arrived on this field is entitled to get the premium. Remote buys are always pos­sible. This means that the other player may not refuse this buy. Remote buys are also possible with support points.

Plots, support points (please see the third point of chapter 5), toll stations and speed traps may be sold any time, no matter whether at the time of the sale a player is standing on one of these fields. The amount you get for the sale is stated on the respective title deed card. A player, who can not pay the required amount, has to sell as much as nec­essary of his buildings or title deed cards, in order to pay the amount owed. In this case, a sale is also allowed after throwing the dice. The game is over once one player has reached a certain asset threshold (for example 30,000 MU) or when the first player goes bankrupt (if he can not pay the required amount in spite of selling all his possessions).

A player who has thrown the same double twice in succession or any double three times in succession has to go im­mediately to the nearest prison. Afterwards it is the next player's turn. Players who are in prison may not carry out any sales or remote buys. If a player lands on a field owned by a player who is in prison he does not have to pay money. Once it is the imprisoned player's turn he must try to throw a double. In each round he always has one attempt for free. If he succeeds, he is free and must continue to play immediately with another throw. If he throws no double, he has three possibilities. Either he misses one round and it is the next player's turn, or he pays 100 MU and may try to throw a double once again or he pays 500 MU and is also free and must continue to play with another throw. A player who is out of prison must play from the playing field where he was before he came to prison (this should be noted) and may only carry out any sales and remote buys, if it is his turn again. Players who land on the prison field are only visitors. Consequently, they are entitled to get money and may carry out sales and remote buys.

12. Game accessories to print out 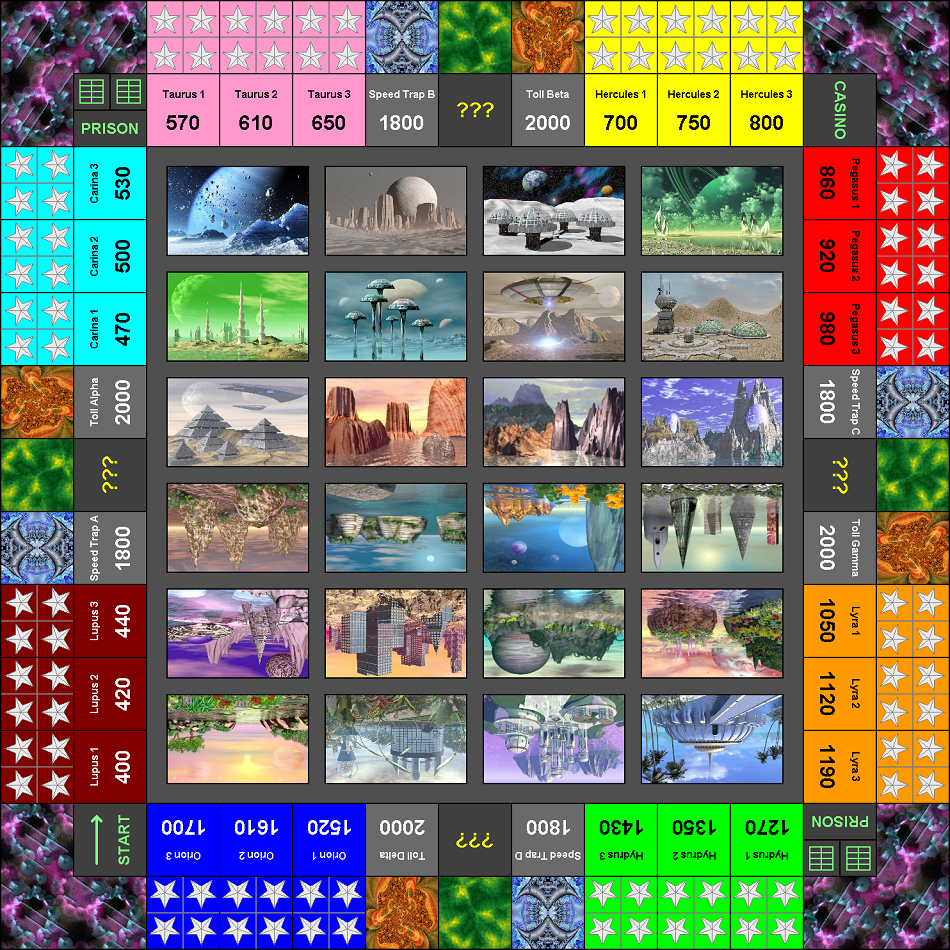 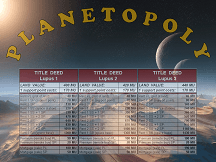 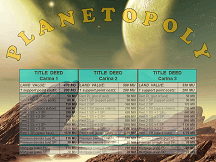 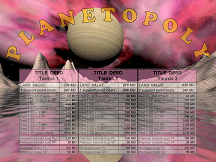 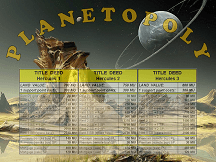 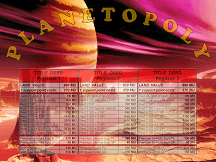 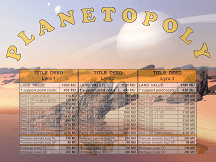 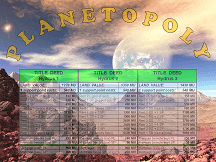 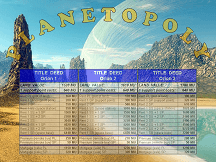